After the terror in Brussels, Paris, and Copenhagen, and the recurrent harassment of Muslims and Jews in Europe, I decided to develope a "tool", and to give it the name Coexista. The tool took the shape of a simple bracelet or anklet that appeals to freedom of expression, tolerance, and peaceful coexistence.

When you read or watch the news, it is easy to get the sense that the world is populated by extremists who seek war and conflict. In Norway and the West, there is a tendency to focus on conflicts between minorities and the majority, and on problems with immigration and fundamentalism.

The vast majority wants peace and tolerance, for themselves, for their families and for their fellow man. Few Muslims are followers of ISIS or Islamic fundamentalism. Many Jews reject the occupation policy of the Israeli government. But in Norwegian and Western media, one can get the impression that the opposite is true. Through the news, it seems that all Jews and Muslims are religious and that many are fanatics. But the truth is that most Muslims and Jews live secular lives – some with family traditions rooted in a religious culture, as the majority of ethnic Norwegians and Europeans do, with traditions such as Christmas and Easter, derived from Christianity.

THE IDEA
The idea for Coexista came to me while I was shooting a reconstructed scene for my new documentary film Nina’s children during the winter of 2015. Chance would have it that this happened just after the terrorist attacks on Charlie Hebdo and a kosher store in Paris, and a few weeks after the attack on the cultural center Krudtønnen and the synagogue in Copenhagen.
Both a movie and a book, Nina’s children tells the story about the Jewish orphanage in Oslo during World War 2. My father was one of the children there at the time, and I am named after Nina Meyer, the orphanage’s founder and caretaker who was like a mother to the children. 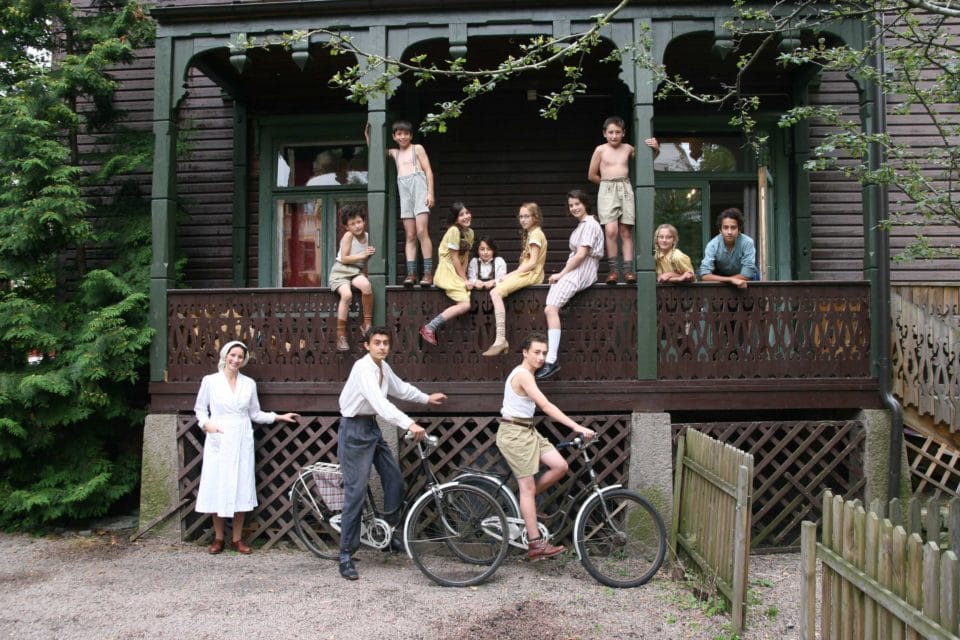 The scene I was about to shoot was an episode from when I was a student at the film school in Copenhagen in 1990, and I paid Nina Meyer a visit. She had moved there after the war. It was exciting to listen to her telling interesting anecdotes and stories from the war. During this afternoon, Nina Meyer, who was not religious, gave me a necklace with the Star of David in silver adorned with a green stone. I have kept the necklace for years, but it has mostly been lying in my jewelry box. In the context of the filming, I found the necklace, and perhaps influenced by the terrorist attacks, I put it on. The . I decided to take a picture of it hanging around my neck, and to post it on Facebook. In the caption, I wrote that for the first time I was wearing the Star of David, and that it was with a natural pride, and with a certainty that I wanted to say something about who I am and my identity. The post on Facebook quickly gained hundreds of likes and countless supportive comments. It touched me. 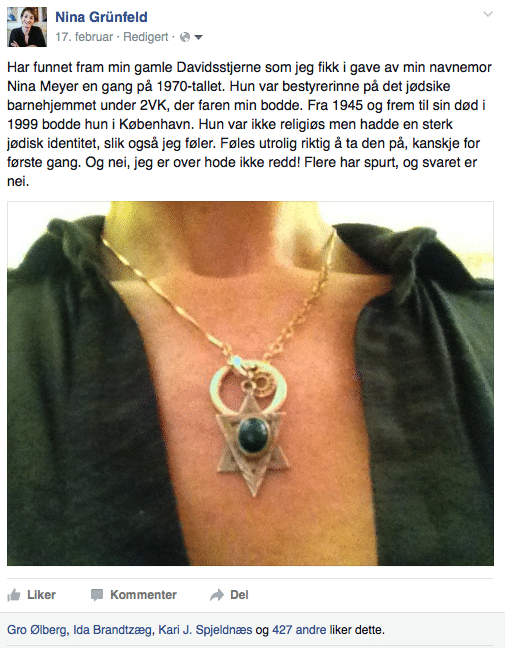 Not long after the terror in Paris and Copenhagen, there was a group of young Muslims in Oslo who took the initiative to form a circle of peace around the synagogue in Oslo on February 21st 2015. They wanted to show that they renounced violence, terror and extremism, and they wanted to debunk the myth that all Muslims are anti-Semitic. In the wake of the peace circle and my post on Facebook, I was invited to NRK P2’s radio program Ekko to meet Zeeshan Abdullah, one of the initiators of the circle of peace. In a good way he conveyed how unfair it is that all the world’s Muslims must stand accountable for terror and extremism exercised in the name of Islam, and that young Muslims will and can distinguish between hatred of Jews and criticism of Israel. During the radio conversation it struck me that we need a symbol, a tool that we can all wear in order to show that we reject islamophobia, anti-Semitism and extremism. What we need is not spectacular postings and news, but rather more focus on constructive ideas and actions. An example of this is precisely the circle of peace around the synagogue in Oslo. Coexista is created in the same spirit, and it aims to support tolerance and peaceful coexistence.

PERSONAL EXPERIENCE
Beyond having a desire to focus on constructive forces in society, I have a personal experience that motivates me. In 2006, the Security Police visited my parent’s house and told them they could not remain in their own home. My late father, a forensic psychiatrist, was listed on top of a liquidation list belonging to a radical Muslim, whom he had met in court. The fact that my father was Jewish alarmed the Security Police further. This was a strenuous experience for my family and reminded us about the loss of my father’s family during the Holocaust.

TODAY
Today’s Western society is populated by a number of minorities. The Jews are among the smallest minorities, and the Muslims among the largest. It alarms me how society develops tighter economic conditions that push young Muslims into unemployment. Consequently, marginalization and frustration contributes to religious radicalization of Muslims. Conflicts with the secular society occur around issues such as freedom of speech and blasphemy. I look with concern upon the way European Jews once again are squeezed between other groups. In both Copenhagen and Paris, Jewish civilians were killed as a result of planned attacks. This form of anti-Semitism must be fought, and Islamophobia must be combated in like manner. As a young Muslim in Norway and in the West today, you should not have to be held accountable for ideas you do not have, nor actions you have not committed.
As a person with a Jewish background, I would feel happy and reassured if I saw my fellow man carrying a symbol that symbolizes a wish to live in peace and harmony. I hope and believe that this applies to my Muslim, Christian and non-religious co-citizens. Coexista is such a symbol.

THE VISION
Coexista fills a void on an ideological and psychological level, both for the individual and for society, by making visible to yourself and to others that you take a stand for tolerance and peaceful coexistence in a multicultural society. By taking a stand, and simultaneously contributing to charity in line with Coexista’s message, I hope Coexistsa will inspire interesting and meaningful conversations, and maybe even give rise to some debates. 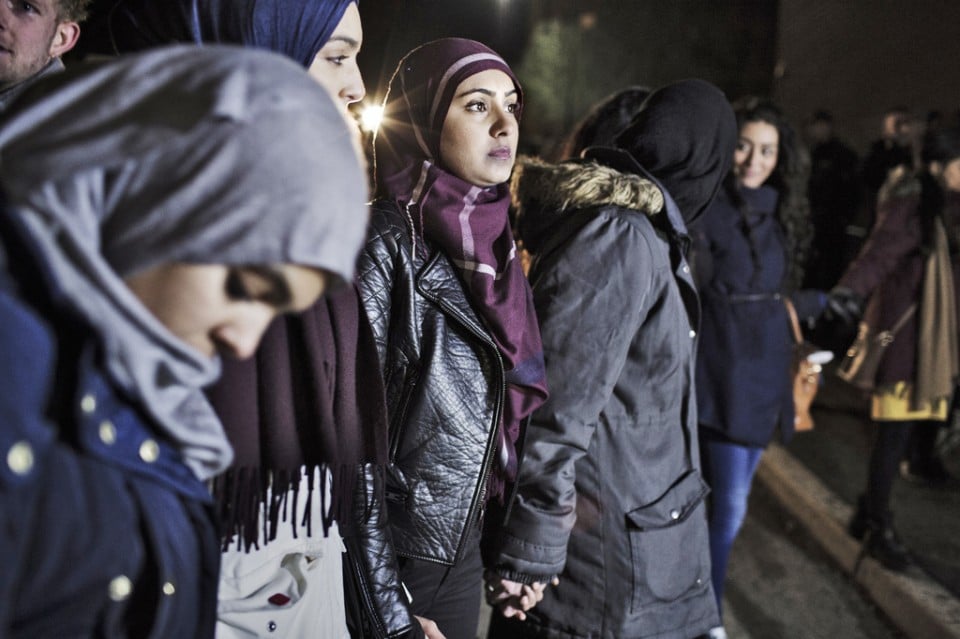 Circle of Peace around the synagogue in Oslo, 21st of February 2015.